Since the announcement of May 11 as a hypothetical date for the start of deconfinement by the French government, you are surely starting to think about the way in which you are going to start to move every day.

Well good news, we have, for medium and short journeys in particular, the solution for a recovery as serene as possible, and without great surprise, it is ... BIKE!

The bicycle, a winning anti-virus combo

The bicycle has more than one advantage to limit the deployment of the epidemic that affects us as much as possible, and cities around the world are well aware of this. From New York to Berlin via Bogota, Berlin, Mexico City, Vancouver, Paris or even Montpellier, many of them have started to reflect (or are already putting in place for the most advanced) action plans aimed at multiplying the number of kilometres of passable cycle paths in order to limit episodes of crowded public transport and peaks of pollution.

REASON # 1: The bicycle allows you to limit contact with potential areas carrying the virus (provided you properly disinfect the handlebars, saddle, or even wear gloves if you use self-service bikes) as well as contacts with others and therefore easily respect the famous recommended physical distance meter.

REASON# 2: Its large-scale practice would greatly reduce automobile traffic, the main source of air pollution, which is a recognized contributor to respiratory difficulties and illnesses.

REASON# 3: Because after two months of confinement, being able to get some fresh air and practice an outdoor sporting activity without time or distance limit is surely one of the healthiest ways to get back on track. Cycling helps avoid crowd anxiety. It also promotes regular activity which contributes to the strengthening of our immune system, which needs more than ever to be boosted at this time.

REASON# 4: Because no matter the schedule and traffic, the bike allows you to arrive on time and get back to work without stress

REASON# 5: Finally, an important element in this period of crisis which will also be of an economic nature, cycling is very inexpensive.

The Bonus Benefits of the Teebike wheel for a smooth deconfinement

And by betting on the Teebike wheel mounted on the bike that you have always liked, the list of advantages of the bike in a period of exit from the crisis is growing a little more because:

BONUS REASON # 1: You will arrive all the more serenely at your place of work as the different levels of electrical assistance of the wheel will allow you to manage your effort as you wish ...

BONUS REASON # 2: ... And especially not to get everything sweaty at your office.

BONUS REASON # 3: If this health crisis has shown us something, it is that our environment is sensitive, hard impacted by many of our behaviors but also that it can regenerate much faster than we think when we give him a break. So why not, everyone, make a contribution to the building and, for example, take the opportunity to recycle their bike by giving it a second electric life rather than buying a brand new bike?

So go ahead, and, with or without the Teebike wheel, #StayCycling!

Because as the Olympic individual pursuit champion Chris Boardman put it so well: "Take any crisis ... And you will see that the bicycle is the solution. 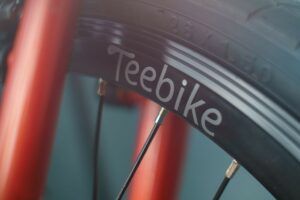 The Teebike wheel continues to rotate during the confinement period. The whole team remains mobilized to provide you with the best service while taking into account obligations and instructions to protect everyone's...